Carmen Welker is not a happy bunny at the moment! To be more accurate we must give Carmen her due, after all she is a self appointed Rabbi no less!!

Presently she has had to revise just the URL of her 365 messianic prophecies that Yeshua fulfilled apparently:

It has come to our attention that some “anti-missionaries” (traditional Jews and Christian converts to Judaism who have made it their goal to disprove Yeshua and the New Testament) have been using this page as an example to poke fun at those of us who are Torah observant believers in Yeshua. Ironically – amidst the jokes and giggling and the sarcastic barbs aimed at the Messianic prophecies we’ve posted below – the most they ever really accomplish during their radio shows is proof that they know how to form personal opinions about what the Bibles says! (But then, we must remember that these people also believe that the Talmud (the man-made “Oral Torah”) is just as, if not more important that YHWH’s Torah….)…..Scripture warns us that these things would happen, and all we can really do for those scoffers is to keep them at a distance while we pray for them: Romans 1: 18.

If you like a good chuckle tune into the following links:

Taking the issue of respect into consideration as well as love for Israel, Jewish people and Judaism, the ‘Christian’ lexicon is somewhat different to what the normal lexicon defines love and respect as. Going by the normal lexicon, respect is a positive feeling of esteem or deference for a person or other entity (such as a nation or a religion), and also specific actions and conduct representative of that esteem. Respect can be a specific feeling of regard for the actual qualities of the one respected (e.g., “I have great respect for her judgment”). It can also be conduct in accord with a specific ethic of respect. Respect should not be confused however with tolerance, since tolerance does not necessarily imply subordination to one’s qualities but means treating as equal. Respect is not the ‘new’ misappropriation/ distortion of Jewish literary sources as some missionaries in a new wave of evangelistic efforts feel very much at liberty to do so!

In regard to ‘respect’ I am reminded of an incident a number of years ago when those missionaries who are called Jehovah Witnesses (JWs) just so happened to be in our Jewish community in the UK. The JWs were doing their usual door to door stuff when they came across our door. The opening line of one of those missionaries was like this “we JWs have great respect for your people and religion……” before they could get the ‘but’ in, my wife always quick and straight to point stopped the missionary in her tracks. Very succinctly my wife stated that if she really did respect our people and religion she (the missionary) would not be trying to convert us to their (JWs) religion. Needless to say this very clear definition of respect stopped her missionary endeavors immediately with respect to our house at least.

We cannot help it it’s in our nature

folks who brand themselves as ‘messianic’ is that their messiah is the ‘de-paganized’ ‘Jesus’; aka ‘Yeshua’. Like as if de-paganizing Jesus is sufficient to stop any further questions or inquiry! The many excuses however, do not jive with an agenda set even by the New Testament. Incidentally, the semantic term ‘New Testament (Brit Cadasha)’ when compared with the term ‘Old Testament’, is after all to tell us that ‘New’ is better than ‘Old’ right? What is the agenda being promoted by all those ‘Christians’? The agenda IS adequately and plainly described by the New Testament itself regardless of the fog of the myriad of ‘Christian’ excuses:

I tell you that something greater than the temple is here. Mat 12:6….The former regulation is set aside because it was weak and useless. Heb 7:18….Because of this oath, Jesus has become the guarantor of a better covenant. Ibid v 22….But in fact the ministry Jesus has received is as superior to theirs as the covenant of which he is mediator is superior to the old one, since the new covenant is established on better promises. Ibid 8:6….to Jesus the mediator of a new covenant, and to the sprinkled blood that speaks a better word than the blood of Abel. Ibid 12:24….Yea doubtless, and I count all things but loss for the excellency of the knowledge of Christ Jesus my Lord: for whom I have suffered the loss of all things, and do count them but dung, that I may win Christ, Phil 3:8….Therefore go and make disciples of all nations, baptizing them in the name of the Father and of the Son and of the Holy Spirit, Mat 28:19

The agenda is that the New Covenant is superior to the Old Covenant because of Jesus/ Yeshua. So much superior that the NT likens the ‘old’ testament as  weak, useless and dung (literaly shit!) Moreover that Jesus/ Yeshua / Paul positively encourage missionary activity to convert all nations to their superior revelation/ covenant. When a ‘Christian’ insists that they love and respect Israel, Jewish people and Judaism they are not being to true to the “New” Testament and the very words of Jesus/ Yeshua. Inherently the missionary ‘Christian’ deep down knows what they belieeeeeeve is superior but for the sake of the subtle propagation of the agenda they must at all costs maintain the illusion of ‘respect’ to those they wish to convert!

Meanwhile here is a reality check for any potential disciple of Rabbi $huli [$huli as opposed to $hali if one takes into account the authentic Aramaic NT as opposed to Greek and equates it with the de-Greeked/ de-Aramaicised Yashua/ Yashywashy names respectively etc…..: 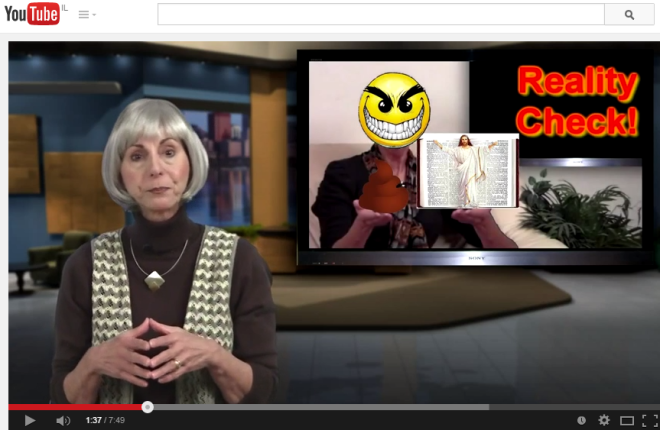 Carmen claims a violation of her copyright over her picture

Carmen Welker the idol worshipper and missionizer to idolatry.