The Endorsement of Itzhak Shapira – a Video, an Appeal and a Challenge

Posted on June 4, 2018by yourphariseefriend

The Endorsement of Itzhak Shapira – a Video, an Appeal and a Challenge

Please note that Shapira is currently (31 Dec 2018) on a troll to remove the above video:

Itzhak Shapira holds “full ordination” from the IAMCS and his book; “The Return of the Kosher Pig” comes with ringing accolades from some of the top names in Messianic and Evangelical circles. With these endorsements in his back pocket, Shapira disseminates his teachings in person and online to innocent and well-meaning people all over the world. These people cannot on their own evaluate Shapira’s expertise because they do not know the language of the texts that serve as the basis of his teachings. Instead, they rely on the appraisal of those who have granted him ordination and who claim to see him as a serious scholar.

Recently, Shapira released a video of one of his teachings. In this video, Shapira does not limit himself to the teaching itself. He tries his hand at reading a few lines of the Talmud. The Talmud is the foundational book of rabbinic literature and Shapira is described by these Christian leaders as a scholar in the field of rabbinic literature. But Shapira is nothing of the sort.

I showed this clip to a few elementary school children, ages 12-14. These youngsters are beginners in the study of Talmud. These children were convinced that this was some type of comic skit. Shapira’s inability to make his way through a few simple lines of Talmud was so embarrassingly obvious to these beginners that they could not imagine someone posting such a video unless he was trying to make a joke.

I now turn to those leaders who have put their names behind Itzhak Shapira and I appeal to you. Please check out this video. Absorb the incredible ineptitude displayed in this video and ask yourselves if this man can lay any legitimate claim to expertise in the realm of rabbinic literature. On what basis do you allow this impostor to mislead innocent people? How can you aid and abet Shapira’s ongoing deception?

I challenge you to live up to your calling as human beings created in the image of God and publicly withdraw your endorsements from Itzhak Shapira. I hope and pray that you do so with tact and with sensitivity, but also effectively and decisively. Those who have put their trust in your leadership deserve no less. 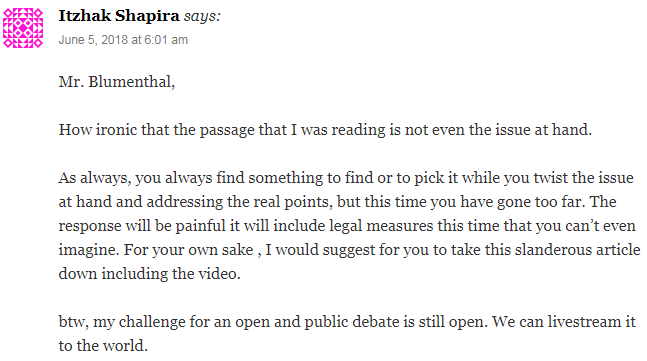 Unfortunately this “rabbi” cannot proficiently read through a line of Talmud . This video is riddled with blatant mistakes and misinformation.

For the sake of education and exposing it for the sham it is:

First off he starts with a mistake about the page: he tells his audience that the Hebrew letter פ has the numerical value of 70. In truth though, it is actually 80. He then tells his viewers that a page of Talmud has too sides (i.e. side a and side b) he refers to these sides as ‘Daf Alef’ and ‘Daf Bet’. In truth, there is no Daf Alef in the Talmud. In the Talmud side a is referred to as Amud Alef and side b is referred to as Amud Bet.

We then hear him inform his viewers about the context leading up to the line he wants to read, he misleads his viewers to believe that the discussion of the lines of Talmud he fumbled through are speaking of a ‘Tikun’ and of a ‘Pidyon’. The truth is that the words that he read have nothing to do with a ‘Tikun’ or a ‘Pidyon’.

He then asserts that the part that he wants everyone to pay close attention to is a continuation from the lines above. (i.e. part of the topic of discussion being addressed just prior to it.) This too is erroneous.

His attempt to read and translate both the Talmud itself and the words of Rashi would make entry students of the Talmud laugh and cry.

For the purpose of the exercise please click on this link which has both the Aramaic and the translation with elucidation of that page of Talmud. He is referencing the last section of page 80 a.

Rav and Shmuel and Rav Assi once met at a Bei Shavua HaBen (lit. house of the week of the son) (circumcision of a boy) or as some say, at a Bei Yeshua HaBen (lit. house of the redemption/salvation of the son) (a party for the redemption of a son). [The story continues] Rav would not enter before Shmuel, nor Shmuel before Rav Assi, nor would Rav Assi enter before Rav. They therefore argued who should go in last, [and it was decided that] Shmuel should go in last, and that Rav and Rav Assi should go in [together].

What Tzahi then asserts here is that the words Bei Yeshua HaBen somehow refers to a “son” who’s name is Yeshua which he asserts is a reference to Jesus of Nazareth.

This is a display of ignorance at its finest.

Based on this inane assertion, Tzahi claims that this line in the Talmud “proves without a shadow of a doubt” that the author of at least parts of the Talmud was a believer in Yeshua.

What upsets me is that Christian/ Messianic scholars allow him to get away with it. His viewers are clearly unable to know whether he knows what he’s talking about or not and he is taking advantage of their inability to challenge him.

More on the scholarly output of Shapira here.