Some of the deniers of the ‘Trinity’ amongst Messianic and Christian groups insist in the term ‘godhead’ rather than ‘Trinity’ for a plural unity of the ‘godhead’ and typically prefer to describe a necessary functional nature to the ‘godhead’. It is not readily clear amongst Messianic and Christian groups if the ‘godhead’ has always been a plural unity (made up of parts, persons and/or functions) or was an absolute unity (not made up of parts, functions, intrinsic duality or plurality but absolutely one1) that became a plural unity as a result of the necessary functional nature of the ‘godhead’ functioning (cf “I the LORD do not change” Mal 3:6). That is to say for example, just before and after creation, the “god” of necessity needed to be a ‘God’ and a ‘Spirit’, hence at creation we see the “the Spirit of God was hovering over the waters” (Gen 1:2b). By referring to the ‘God’ and the ‘Spirit’ it is possible to speak of two concepts in relationship to the ‘godhead’: essence (‘God’) and position (‘Spirit’ hovering over the waters), hence a plurality. If before creation, “god” was an infinite plural unity instead of an absolute infinite unity, then it is possible to say that the ‘godhead’ is composite i.e made up of from the necessary functional parts or persons of Father, Son and Holy Spirit for example. A composite ‘godhead’ however, cannot be eternal, since there must have been a time when the separate parts (parts finite or infinite?) were joined together by a previous cause to make a unified (infinite?) whole. Now it stands to reason for God to be eternal, God has to have no previous cause and no beginning and also no end.

A typical position taken by ‘Jewish’ (?) Adventists is given below:

“Adventism does not embrace a plurality of deities, rather a single Deity who has chosen different means of inter-personally communication and relating with His greatest creation, hence the term Persons. We must remember that man’s dimension is not G-d’s dimension. Depending on who you ask, man lives in 3 or 4 dimensions – Height, Width, Depth and “Time”. G-d resides in neither of these nor is He bound by them. It was not until His corporeal manifestation (Jesus), that He was “literally” able to walk with man (unlike the terms “and G-d walked with Enoch” which was not literal), “literally” speak face to face (unlike the term “And the LORD spake unto Moses face to face, ” which was not literal). It was not until that unexplainable mystery of godliness, that G-d was able to be pierced through and bare our iniquities. – Zech. 12:10 (from a ‘Jewish’ Adventist discussion board, Feb 2011) (Permission to quote the above quote from the Facebook page “Jewish Adventist Friendship Center” is granted by the owners of said Facebook page. The quote may be found in the second of the two links: http://www.facebook.com/topic.php?uid=61418912603&topic=31199 http://www.facebook.com/topic.php?uid=61418912603&topic=31204, these links have been re-hashed from the original discussion thread (original feedback comments have been removed).

The 12th Chapter in the Book of Zechariah describes a war of nations against Jerusalem, in which Judeans fought on the side of the enemy for a while and, when they realized that G-d was with the people of Jerusalem, they “turned around” and joined the battle against the enemy, which led to the deliverance of Jerusalem and the restoration of its status. The victory will, however, be followed by grievous mourning over those who fell in the battle. The passage Zechariah 12:8-14, when read in the original Hebrew text, or in a correct translation thereof, clearly shows that the prophet could not possibly have spoken of Jesus. For example, the prophet makes the promise that Jerusalem and its inhabitants will be protected:

Zechariah 12:7, 8 — (7) And the Lord will save the tents of Judah first, so that the splendor of the House of David and the splendor of the inhabitants of Jerusalem should not overwhelm Judah. (8) On that day, the lord shall protect the inhabitants of Jerusalem, and it shall come to pass on that day that even the weakest among them shall be like David: and the House of David shall be as angels, like an angel of the Lord before them.

The historical record testifies that, less than 40 years after Jesus died, Jerusalem was torched and destroyed by the Romans, and its people were expelled and exiled. So, this is yet another prophecy that Jesus did not fulfill. The prophet also foretells the destruction of those nations that attacked Jerusalem:

Zechariah 12:9 — And it shall come to pass on that day, [that] I will seek to destroy all the nations that have come upon Jerusalem.

However, according to the historical record, none of these nations were destroyed in the days of Jesus. This, too, remains a prophecy not yet fulfilled.

Moreover, another problem is the Torah specifically forbidding human sacrifice. The nature of the necessary substitutionary divine/ human atonement (Jesus) says by the New Testament:

18 For Christ died for sins once for all, the righteous for the unrighteous, to bring you to God. He was put to death in the body but made alive by the Spirit, 1 Peter 3:18 (New International Version)

Characterizing the death of Jesus on the cross as any kind of sacrifice would render it to be a human sacrifice and a clear violation of Torah. Heathen Semitic worship was cruel, often requiring human victims. In absolute contrast, the Torah forbids human sacrifice: 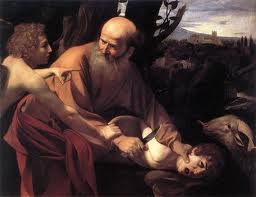 Analyzing the necessary functional nature of the ‘godhead’ further, is an example using a typology. The typology used by Messianics and Christians, attempts to create a correlation between the “Binding of Isaac” (Abraham’s near sacrifice of Isaac) and God’s sacrifice of Jesus. Unfortunately the correlation breaks down practically before it ever begins. The typology says that God sacrificed His own son just as Abraham would have sacrificed his own son, had God allowed the act to be completed. However, Abraham was sacrificing his son to God, which showed Abraham loved God more than he loved his son Isaac, something that even God acknowledges in the text:

“He said, “Take now your son, your only son, whom you love, Isaac, and go to the land of Moriah, and offer him there as a burnt offering on one of the mountains of which I will tell you.” (Gen 22:2)

A puzzling feature of the binding of Issac is the opening statement that God tested Abraham, as if the purpose were to provide God with information about Abraham’s trust He did not previously possess. Nachmanides (also known as the Ramban, a 13th century Spanish rabbi), states that God did indeed know beforehand how Abraham would behave but, from Abraham’s point of view, the test was real since he had to be rewarded not only for his potential willingness to obey the divine command but for actually complying with it. The implications of the binding of Issac are that, despite what appears to be a contradiction, divine foreknowledge is compatible with human free will.

Another puzzling feature of the binding of Issac are the previous statements of the Jewish scriptures which forbid human sacrifice. According to a mistaken understanding of Gen 26:5; Abraham was aware of “and kept My charge, My commandments, My statutes, and My laws” and so one might ask why didn’t Abraham just turn around and say to God that the Torah forbids human sacrifice? Rashi on Gen 26:5 points to “Abraham obeyed My voice”, which refers to the test (binding of Issac) Hashem gave to Abraham, since the test was a direct command from Hashem, as opposed to laws of the Torah, which were not directly commanded to Abraham but Abraham followed the laws of the Torah anyway.

Yet another aspect of the binding of Issac, is the Talmud’s reference to Jeremiah. The Talmud (Ta’anit 4a)3 quotes Jeremiah 19:5 (see also Jer 32:35), in which God is reported as saying of child-sacrifice ‘which I have not commanded, nor spoken, nor did it enter My mind’. The Talmud links each of the three expressions, ‘not commanded’, ‘nor spoken’ and ‘nor did it enter My mind’ to a different biblical episode involving or apparently involving child-sacrifice, and explicitly applies the third phrase to ‘Isaac, son of Abraham’. Rashi (ad loc., s.v. ukhetiv asher lo tziviti) explains: ‘That is to say, even though I commanded him, it never entered my mind that he should slaughter his son’. In this passage, then, the Talmud explicitly morally neutralizes God’s command to Abraham to sacrifice Isaac.

1. If, however, you have a desire to rise to a higher state, viz., that of reflection, and truly to hold the conviction that God is One and possesses true unity, without admitting plurality or divisibility in any sense whatever, you must understand that God has no essential attribute in any form or in any sense whatever, and that the rejection of corporeality implies the rejection of essential attributes. (The guide for the perplexed, Friedlander translation, http://www.teachittome.com/seforim2/seforim/the_guide_for_the_perplexed.pdf) Page 153

10 And I will pour upon the house of David, and upon the inhabitants of Jerusalem, the spirit of grace and of supplications: and they shall look upon me whom they have pierced, and they shall mourn for him, as one mourneth for [his] only [son], and shall be in bitterness for him, as one that is in bitterness for [his] firstborn. (Zech 12:10 KJV version)