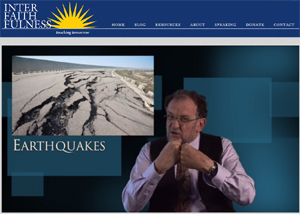 “Interfaithfulness” is a blog/ website by messianic musician, Jews for Jesus ‘rabbi’ Dr Stuart Dauermann. On the blog/ website is apparently, a growing storehouse of information and advice for those who wish to make marriage between Jews and Christians ‘doable’. Now of course, trust me to point out the obvious, is this not a bit like building a house on a hillside in California? Building a house on a hillside in California I got from the eye opening video on the subject so I cannot take credit for it! Not that I would want to by the way! To a certain extent even Stuart does not take credit for it either, since the clincher of the video at the end is with the parable of Jesus espousing the differences between building a house on a rock or a house on sand.

However, as we progress on the path of interfaithfulness, the ‘Jewish’ side of the path may further be hardened because lets face it, those Jews have a history of not living up to their obligations:

What point is the Holy One Blessed be He making here (Jer 35)?  Just this: that the Jewish people have failed to show to Him the honor and respect due him. While the Rechabites show honor to their father Jonadab by obeying his rulings, the people of Israel dishonor God by not obeying his Torah….. So the question we need to ask and answer is this one. In view of all of the above, what does it mean to honor the LORD of Hosts, our Father, Master, and King properly?  And can we rationally excise obedience to his commands from that equation?……. Jews obeying Torah, and Messianic Jews obeying Torah, may be about a number of things. But it is fundamentally about this: showing proper honor to the One who created all that is, and who brought us out of Egypt that we might serve him……   Although we may rightly hold that with the coming of Messiah, our relationship with Torah has gone through a shift, and that we will differ in some areas with many other Jews in matters of interpretation, following the teaching of Yeshua and his sh’lichim [apostles], nothing in the Newer Testament entitles us to suggest that the priority of honoring God by obeying Torah has been withdrawn. (The Foundational Reason Jews, Including Messianic Jews, Should Obey Torah)

“nothing in the Newer Testament entitles us to suggest that the priority of honoring God by obeying Torah has been withdrawn”. Now is this not an interesting phrase, especially in view of the attempts above to make intermarriage between Jews and Christians “doable”?

Of course Stuart claims that the Oral Torah and the religious legacy of ‘our people’ are honorable, beautiful and holy!

Well not really, is it Stuart? “On Keeping Your Mouth Shut and Saving a Life” seems to have some rather hard dynamics to understand when

actually discussing the religious legacy of ‘our people’! Not even when it comes to things which are not even Oral Law but instead just plain biblical (see how Nehemiah sorts out the intermarriage problem in Neh 13:23-28 and Ezra 9:1-2 which also validates Oral Torah too BTW, Jewish status is established through the mother and not the father or via a halachic conversion). Hiding in the smokescreen of “matters of interpretation” will not avail you much in your agenda ‘rabbi’ Jews for Jesus Dauermann because even the ‘older’ Jewish scriptures prove you to be wrong. Intermarriage is not an example of obeying Torah it is in actual fact a violation of it.