Islamaphobia now we are talking?

Many people like journalist Melani Philips are hoping that the horrific murder of Drummer Rigby in broad daylight in Woolwich London will finally wake up those in denial of the very real threat of Islam to the civilized world. Dare we say the ‘civilized’ world? After all would that be racist or anti-religious to even imply that Islam and Muslims are not ‘civilized’? Even though over a decade we have had numerous examples of uncivilized behavior by the religion of peace flying into buildings, bombing trains, bombing airports, chopping folks head off etc…..the list goes exponentially on and on!? 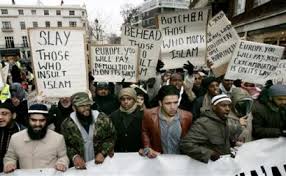 Already right after the murder of soldier Lee Rigby at least three folks in the UK were arrested in the middle of the night for making tweets/ FaceBook posts about Muslims and Islam. In scenes reminiscent from both the extreme left and right of the political spectrum (Gestapo, Stasi and the KGB for example) we have in the UK, the arrest of Benjamin Flatters, of Lincoln, who was arrested after police received complaints from Muslims about allegedly racist or anti-religious messages. The 22-year-old was charged with an offense of malicious communications and remanded in custody; he is due before magistrates in Lincoln.

However, can it be realistically said that criticism of Islam and Muslims are confined to just three folks in the UK? Perhaps it was a selective arrest based upon a subsequent firebombing of a Mosque by other enraged UK citizens in Grimsby Lincolnshire? Posters making anti-Islamic comments beware; your IP address may just be close enough to an anti-Islamic incident and you may suddenly get arrested for allegedly (and very conveniently for the Police and the Politicians who need to be seen to be doing something) encouraging others with your words which are obviously (?) the catalyst for the anti-Islamic incident!

May it be that the vaunted ‘well educated’ UK elite are feeling the pinch? The pinch now challenging what the UK elite would never say but rather think; ….the ‘plebes1’ of UK society are onto something and that they have valid points and real concerns? Perhaps the elite suspect that the majority of folks are not too happy with their agenda to maintain personal freedoms when maintaining personal freedoms in reality means removing the freedoms of those who dare to express their concerns with tweeted words or protest rallies? After all waving Union Jack Flags in Britain is racist and offensive to Muslims is it not?!

The elite would like us to believe we need to take a deep breath, exhale slowly as our enraged wits settle down to a calmer demeanor. Perhaps even quote the New Testament about just loving folks and turning the other cheek! How do we know that these murderers were really Muslims? Well, the video of the crime which was posted on Youtube shows clearly the bloody murderer and his brazen comments on the crime affirming his religion. Easy, now! One needs to learn a lesson from President Obama’s comments after the killing in FortHood (by a military doctor who ‘found’ Islam) and other murder scenes committed by killers shouting the name of Allah. “We are not sure,” commented the President. “..we shouldn’t jump to conclusions…we need to investigate and make sure.” Now remember to apologize, bow deeply and show respect to Islam and Muslims. Just as Obama did, just as Obama does and then remember yourself to always apologize, bow deeply and show respect!

Now at this stage some may say to me are you not overreacting Menashe? In view of the possibility of being carted off in the middle of the night for making a comment, why not take the advice of the elite, after all saying and doing nothing and bowing and scraping to Islam and Muslims will just make it all go away, will it not? The advice of the elite being translated into a policing policy that prefers to avoid the threat of maximal confrontation at all costs from Muslims who complain of anticipated violence by non-Muslims, whilst simultaneously the Muslims promising violence by themselves if the non-Muslim are not removed or silenced. In full compliance, the Police choose the easy option of silencing/ arresting the more compliant law abiding types. At least it would be more comforting if the police were more honest by just saying “Come on you infidels, just move down the road where your protest and your flags will not be seen eh?” Meanwhile Muslims are free to burn poppies, have banners advocating murder and beheading of infidels who insult Islam! Yet another example of the more compliant law abiding types gradually having to give up their freedoms for the sake of the one way street of “community cohesion”, “mutual respect of differing cultures and religions”, “showing tolerance” and all the other bullshit buzzwords of the politically correct.

My story begins around 11 years ago in my professional capacity as a senior lecturer in Electronic engineering at a college in a town made famous by The Beatles waxing lyrical about its potholes. As a visibly Jewish guy I suddenly became embroiled in the fallout of the 2nd Intifada and the results of the town being a major Muslim theological center of the United Kingdom. I remember the first incident vividly when I found a poster on the window of my classroom expressing death to the Jews/ Israel and praising the virtues of Hamas. From there on I was subjected to a two year period of daily verbal abuse from crowds of Muslim youths which ended around the time as I was forced to leave my job with threats of physical violence to myself.

Each day of those 2 years began when I got off the train when I had to run the gauntlet of threats and abuse as I walked through the town center to get to the college. The threats and abuse were also when I walked back to the train station to go home, if I decided to go into town for my lunch and when I walked on campus between one college building and another. A tactic I used to try to avoid such abuse was to travel between one college building and another a few minutes after official break-time between classes.

During those 2 years everybody including the students and the teachers knew of my daily plight but never said anything or did anything. It was only when things started to go wrong as a result of my illness with stress and anxiety and subsequent return to work that the college decided to do something about it. What they did was to discipline me for starting classes 5 minutes too late, my explanation for lateness they refused to consider. Then out of the blue I was frog marched out of my office to the principal where I was informed that I was suspended from college. No reason was ever given for my suspension from College and because there was no reason I returned to my job. However, I was not allowed to teach for a number of months. After this time the College became jittery as I once again resumed my teaching responsibilities and was provided with security guards to escort me from class to class. I still had to run the gauntlet to and from the train station, however. At a meeting in college the police offered a community radio to myself which I indicated I was more than happy to receive and use. However, somewhere in the corridors of power of the College it was decided that me having a police radio was not a good idea. No doubt here is yet another example of the the Police and the College doing their bit for “community cohesion” and the promotion of “respect” blah blah……….blah!

In view of my own experience of hatred by Muslims and now that hatred extending itself to Anglos, I can say in these words I told you so long long ago you Anglophiles. Instead you decided to do nothing, took the easy route and hounded me from my job. The question remaining now is; will you Anglophiles wake up, now something more closer to home has happened to you? Do you have the balls of my grandparents generation who run up those beaches in Dunkirk and Normandy (yes one of my grandparents did that) to preserve true freedom from tyranny?

First they came for the communists,and I didn’t speak out because I wasn’t a communist.

Then they came for the socialists,and I didn’t speak out because I wasn’t a socialist.

Then they came for the Jews, and I didn’t speak out because I wasn’t

Then they came for the Catholics,and I didn’t speak out because I wasn’t a Catholic.

Then they came for me,

and there was no one left to speak for me.

1 A derogatory term for someone considered unsophisticated or uncultured.

2 thoughts on “My Islamaphobia”