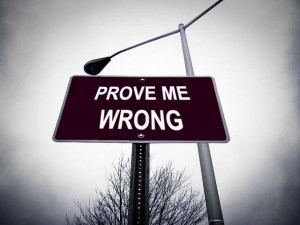 1. R. Yosef Albo [Sefer Halkkarim, 323] offers the following philosophical proof for the existence of an oral law. R. Albo states that a perfect text must, by definition, be totally unambiguous and not require any additional information to be understood. Since the Torah is called perfect [Psalms 19:8], the Torah must not have any ambiguities. However, it does have ambiguities. For example, the verse [Deut. 6:4] “Hear 0 Israel! The L-rd is our G-d, the L-rd is one” is understood by Jews to imply absolute monotheism while it is understood by Christians to imply a trinity. How can a perfect Torah contain ambiguity? Only if the Torah includes an oral explanation that clarifies all ambiguities can it be called perfect [cf. Maimonides, Moreh Nevuchim, 1:71]. Therefore, R. Albo states, there must have been an oral tradition transmitted along with the written Torah

2. Yehudah HaLevi [Kuzari, 3:35] states simply that it is impossible to read and understand the words of the bible without a tradition regarding the vowelization and punctuation of the words. A simple reading of the text requires an oral tradition [cf. R. Avraham Ibn Daud, Commentary to Torat Cohanim, Baraita DeRabbi Yishmael sv. R. Yishmael]. Since the only existing tradition regarding the text includes a tradition about the concepts and laws, one who accepts the vowelization and punctuation must also accept the oral law. It is inconsistent to accept the oral tradition only partially [cf R. Shimon ben Tzemach Duran (Rashbatz), Magen Avot Hachelek Haphilosophi, 23 p. 30b; R Shlomo ben Shimon Duran (Rashbash), Milchemet Mitzvah, First Introduction].

3. R. HaLevi further asks what the Torah means when it says [Exodus 122] ‘This month shall mark for you the beginning of the months”? To which months is this referring? Is it referring to Egyptian months (where the Jews were living at the time) or Chaldean months (from where their patriarch Abraham originated)? Solar months or lunar months? Without an oral tradition, there is no way to know to what this verse is referring [cf R, Avraham Ibn Ezra, Commentary, Lev. 25:9; Rashbatz, bid. This, by the way, seems to alleviate the issue of counting January as the first month. Since the verse is referring to lunar months, there is no prohibition to count January as the first solar month].

4. Also, It HaLevi asks, what does the Torah mean when it says that animals are permitted to be eaten after slaughter [Deut. 12:21]? Does that mean any kind of killing or only through slitting the animal’s neck? [Cf Rashbatz, ibid.]

5. Furthermore, when the Torah [Lev. 3:17] says “It is a law for all time throughout the ages, in all your settlements: you must not eat any fat or any blood”, what exactly is fat? Are there different types of animal fat, some which are permitted and some which are forbidden? How are these fats differentiated? [Kuzari, ibid; Rashbatz, bid.]

6. Also, when the Torah forbids certain birds [Lev. 11:13-19], does that mean that all other birds are permitted? Or are there sign for birds like there are for animals [Lev. 11:2-8]? [Kuzari, ibid; Rashbatz, bid.] How can anyone know whether biblical law permits or forbids eating ducks, geese, and turkeys [Kuzari, ibid]?

7. When the Torah [Ex 1629] says “Let no man leave his place on the seventh day” to what place is this referring? Does it mean his home, his property if he has more than one home, his neighborhood, his city, or something else [Kuzari, ibid; Rashbatz, bid.]? In fact, Isaiah [66:23] says “It shall be that at every New Moon and on every Sabbath all mankind will come to bow down before Me – said the L-rd” which implies that people will leave their homes on the Sabbath and go to worship the Lo-rd [Rashbatz, bid., 31a]. Evidently, Isaiah did not understand this verse in Exodus as the simple reading would have it.

8. What does the Torah mean when it [Ex. 20:10] forbids “work” on the sabbath? What work is forbidden and what is not? [Kuzari, bid; Rashbatz, ibid., 30b; Rashbash, ibid.] Without an oral explanation of the details of this forbidden work, it is impossible to know what the Torah means.

9. The sections of Exodus [ch 21] and Deuteronomy [ch. 21-25] that deal with monetary and physical crimes do not seem to contain enough information to formulate a working legal system. How can a court legislate with so few guidelines? Certainly, for courts to function based on biblical law there must have been more information given in the form of an oral law [Kuzari, bid; Rashbatz,

10. The laws of inheritance as stated in Numbers [27:8-11] cannot begin to address all of the many complicated situations that can and have arisen throughout the generations. Without an oral law, how does a society apply the biblical inheritance laws [Kuzari, ibid; Rashbatz, bid.]?

12. A baby must be circumcised on the eighth day [Gen. 17:12]. What if the eighth day falls out on the Sabbath? Can a circumcision take place on a Sabbath or is that considered work? The Passover sacrifice must be brought by every Jew [Ex. 12:47] on the day before Passover [Num. 9:5]. What happens if that day falls out on the Sabbath? Surely, slaughtering and offering a sacrifice is work. Which takes precedence — the Sabbath or the paschal sacrifice? There must be an oral law to explain this if these laws were intended to be put into practice [Kuzari, bid; Rashbatz,

13. R. Shimon ben Tzemach Duran points out that the Torah tells us that Jethro advised Moses to appoint judges. Jethro then told Moses [Ex. 1820] ‘Enjoin upon them the laws and the teachings, and make known to them the way they are to go and the practices they are to follow.” What does that mean? If the written law is all that was given, then there is nothing more for Moses to instruct these judges. What is Moses supposed to tell them, if not the oral law [Rashbatz, bid.]?

What possible knowledge is there that can be hidden? If there is no oral law, then the only basis for judgment is in the Torah which is open for anyone to study. Clearly, the entire need for the above process of going to the central court and following their ruling implies that there is an oral tradition which also serves as the basis for judgment [Rashbatz, ibid.; Rashbash, bid].

15. R. Yehudah HaLevi points out that Daniel [Dan. 6:11] risked his life to pray. However, nowhere in the written Torah do we see a commandment to pray [Kuzari, bid.; Rashbash, While there is argument regarding the source of the obligation to pray [cf Maimonides, Sefer Hamitzvot, positive commandment 5; Nahmanides, ad. loc.] and whether there is an obligation to risk martyrdom for prayer [cf R. Nissim ben Reuven, Commentary to Rif, Shabbat 22b sv. Umakshu] , the question remains — how did Daniel know whether or not to offer his life for this commandment? Without an oral law to explain the details of martyrdom, there is no way of determining when and where to become a martyr and when not to.

16. R. Duran notes that after King Solomon had the Temple built, he sanctified the interior of the courtyard by personally offering sacrifices [1 Kings 8:64]. How could Solomon offer these sacrifices in the Temple when every indication in the Torah is that only priests may offer sacrifices? From where did Solomon know that a non-priestly king can offer a sacrifice to sanctify the Temple if not from an oral law? It certainly is nowhere in the written law [Rashbatz, bid].

17. Similarly, R. Duran points out that Elijah offered a sacrifice on Mt.Carmel [1 Kings 18:3- 38]. However, the Torah forbids bringing sacrifices outside of the Temple [Deut. 12:13-14]. From where did Elijah receive permission to violate this prohibition unless he knew from an oral law that in his case it was permitted [Rashbatz, bid.]? 18. Consider the following passage.

There was also a man prophesying in the name of the L-rd, Uriah son of Shemaiah from Kiriath-Jearirn, who prophesied against this city and this land the same things as Jeremiah. King Jehoiakim and all his warriors and all the officials heard about his address, and the king wanted to put him to death. Uriah heard of this and fled in fear, and came to Egypt.

Uriah was scared for his life so he fled to Egypt. However, the Torah says in three separate places [Ex. 14:13; Deut. 17:16, 28:68] that it is forbidden for a Jew to return to Egypt. How did Uriah know that his action was permitted? Even to save his life, how did he know that it is permissible to violate a biblical commandment to save his life if not through an oral tradition [Rashbatz, bid.]?

19. When the Jews returned to Jerusalem with permission from the Persian government to rebuild the Temple, Haggai tested the priests on their knowledge of the laws of purity. He asked them the following two questions [Haggai 2:12-13]: “If a man is carrying a sacrificial flesh in a fold of his garment, and with that fold touches bread, stew, wine, oil, or any other food, will the latter become holy?… If someone defiled by a corpse touches any of these, will it be defiled?” The answers to these two questions are not in the Torah. How were the priests to know the answers if not from an oral tradition [Rashbatz, ibid.]?

Why Did G-d Give An Oral Torah?

Now that it has been established that there is an oral tradition regarding the law, the question remains why G-d intentionally gave the Torah in two parts — a written part and an oral part.

20. As we said above (1), any written book is subject to ambiguity [Maimonides, Moreh Nevuchim, 1:71]. Since that is the case, had G-d only given us a written Torah, its interpretation would have been debated due to vagueness. Therefore, G-d also gave a tradition that would be taught orally from teacher to student so that the teacher could clarify any ambiguities [Rashi, Eiruvin, 21b sv. Veyoter; R. Yosef Albo, Sefer Halkkarim, 3:23]. R Yair Bachrach [Responsa Chavat Yair, 192] and R. Ya’akov Tzvi Mecklenburg [Haketav Vehakabalah, voL 1 p. viii] dispute this argument and claim that since G-d is omnipotent, He could have created a totally unambiguous book. However, it seems to this author that the original argument was assuming that any written book is, by definition, ambiguous. It is a logical impossibility to have a completely unambiguous book. In fact, the example that R. Bachrach offers of an unambiguous book is Maimonides’ Mishneh Torah which, despite its clarity and brilliance, has dozens if not hundreds of commentaries that try to clarify its ambiguities.

21. It is also suggested that the entire corpus of law that governs every possible case that could arise would be endless and would certainly not fit in one or even five books. The Talmud itself has over 2,700 double-sided pages. To put all of this detail into the bible would have made it a very cumbersome book that, inevitably, would have left out details that cover a future case [Sefer Halkkarim, ibid.; R. Yehudah Loewe, Gur Aryeh, Ex. 34:27].