The media bandwagon is presently rolling out the latest grief fest with the death of Nelson Mandela. The general consensus among those who followed him is that no one is allowed to say anything bad about him or G-d forbid that anyone should make any comparisons or evaluations. However, just to keep things fair and not to go too far, folks do have the right to say something BUT only as long as it is the right something.

My little bit of something was to post a picture of Nelson Mandela and his activities as a ‘freedom fighter’. The list does not make for a very complimentary picture of a principle or an idea where freedom comes at the expense of innocent people being blown up in bars and restaurants in South Africa. Was the freedom of those terrorized by the bombing of restaurants in South Africa less valuable? So bombing and terrorism makes it right because blacks have suffered?

But wait a minute, as I was told by one Mandela worshiper, you just do not understand South African History and the horrors of ‘Apartheid’ in particular. Now such a thing would be more true if it was not for the fact of another form of Apartheid known as ‘Segregation’ which occurred on the other side of the ocean. The same problems existed there too; separate schools, parks, cafes……….slavery, burning of black folks houses and black folks also. You get the picture I hope? Further to add another parallel: the black leader of the civil rights movement Martin Luther King Jnr (MLK). Now what a contrast we have with the real non-violent protest of Martin Luther King Jnr, no bombing of bars or gasoline necklaces with this man unlike Mandela and his loyal followers! Moreover, MLK’s non-violent protest did make a change for the better! Yet those worshipers of Mandela would insist that Mandela was a Christian too! Will the real Christianity please stand up?! No killing in the name of freedom can ever be justified but it does not stop those who fawn and run over each other to be associated with such a ‘great man’ as the current media grief fest shows!

Nelson Mandela was a terrorist plain and simple and woe betide anyone who disagreed, those gasoline necklaces prove it.

In another bizarre twist: A sandwich shop owner endured eight hours of questioning by police and had his computer seized for three weeks – after making tasteless 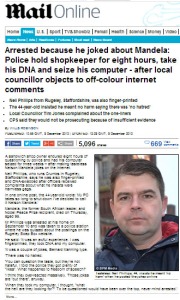 Nelson Mandela jokes on the internet.

Neil Phillips, who runs Crumbs in Rugeley, Staffordshire, says he was also finger-printed and DNA-swabbed after officers received complaints about what he insists were harmless gags.

In one online post, the 44-year-old wrote: ‘My PC takes so long to shut down I’ve decided to call it Nelson Mandela.’

‘When they took my computer, I thought, “what the hell are they looking for?” To be questioned would have been over the top, never mind arrested.’

You can question the taste, but they’re not hateful. I told the police they got plenty of “likes”. What happened to freedom of speech?

The answer is simple you have the right to free speech Mr. Philips as long as its the right speech and you understand its not free anymore as the seizure of your computer, finger-prints and DNA-swab shows you very well!

What you have to understand Mr. Philips is that you are amongst the more compliant law abiding types who are gradually having to give up their freedoms for the sake of the one way street of “community cohesion”, “mutual respect of differing cultures and religions”, “showing tolerance” and all the other bullshit buzzwords of the politically correct.

“For, after all, how do we know that two and two make four? Or that the force of gravity works? Or that the past is unchangeable? If both the past and the external world exist only in the mind, and if the mind itself is controllable – what then?” George Orwell 1984