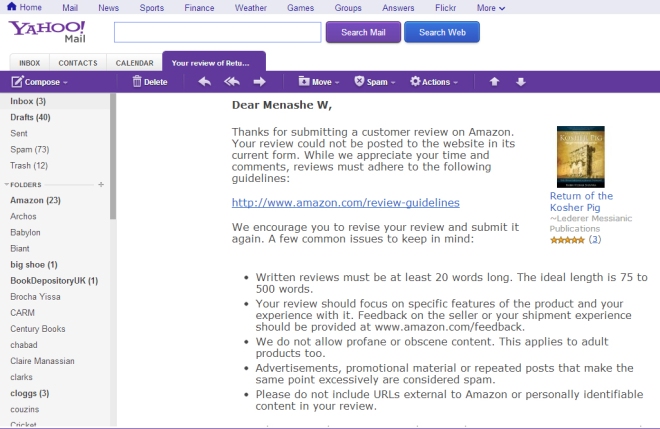 There was a fellow who said that if the lie is big enough, people will refuse to deny it. Of course, only the recipient of the lies is befuddled. The liars know what is true. Liars don’t struggle with 2⁹⁹+2⁹⁹=5⁹⁹. The liars know that the equation is pointless and the answer is irrelevant. Telling a lie is easy, trying to figure the lie out is difficult. The confusion that lies create is a one-way street. The masters of lies are thus the only people in their own opinion who know the truth. To all intents and purposes, the masters of lies are the way, the truth and……. Oops, does that sound familiar? Of course it does!

Well finally the book “The Return of the Kosher Pig” is out for sale on Amazon. In an attempt to circumvent any problems with the sale of the book the parameters for ‘apparent’ discussion of the book have already been set: you have to buy the book and read it! No doubt this is a subtle way of discounting the already published premise for the book:

“I am sure that some of you who read the title of the book (Return of the Kosher Pig) raised an eyebrow or two. Who is the Kosher Pig and why will he return? I can assure you today that the title The Return of the Kosher Pig does not involve any type of marketing gimmick of any sort to sell more copies! Before getting upset about the title of the book, I would like to briefly explain the important term “Kosher Pig” as it is an important premise for the rest of the book. The pig, or Cahzir (חזיר) in Hebrew, represents the symbol of uncleanness to the Jew” Yeshua of Nazareth is the only one who claimed to be divine in nature with the full authority to even forgive sins. Modern Judaism that is built on 13 articles of faith clearly rejects the idea that G-D can take a form of a man. Yeshua because of his claims is considered unclean to the Jewish people. Amazing, some of the Rabbis declared that the pig will return during the days of Messiah and will become Kosher as he reveals his true nature. The Return of the Kosher Pig attempts to bring back the un-kosher Yeshua to the Jewish people by presenting the case for the divine Messiah.” http://www.kosherpig.org/index.php/about

The premise for the book is quite simple to work out:

A problem is as one viewer Brain Lasater pointed out:

Shapira is a Christian. Let’s make that clear right away. He is NOT a Rabbi. He is a pastor who got his certificate from a christian seminary that specializes in “Jewish” wannabe propaganda.

Shapira has many youtube videos discussing this book. If you watch them, you will find out all you need to know about this book. The book is based on taking the words of Rabbi’s over the last 2000 years and distorting their message beyond recognition. For example, the title of the book, the Return of the Kosher Pig. The author makes the claims that the Rabbis said in the end of days, the pig which is not kosher will return kosher. The author says that is a picture of Jesus of Nazareth. Not a kosher messiah to the Jewish people but will return the 2nd time as kosher.

A) Not what the Jewish sages meant by kosher pig at all. This is an invention of Shapira’s.

B) If the Jewish sages would have said such a thing, why did they NEVER accept the man from Nazareth as messiah? Because he was not even close to being the Jewish messiah and is in fact a roman hybrid mixture of god-man mythology and Judaism.

From my own observations I may also add that when Messianics quote rabbinical, kabbalistic or midrashic sayings to justify their beliefs in a 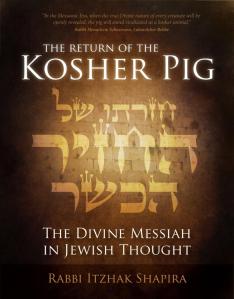 deified Yeshua: 99.9% of their quotes are from Rabbis who post-dated Yeshua himself. Another thing to note is that 100% of these Rabbis themselves said what they said and rejected the possibility that Yeshua was the Messiah let alone a divine Messiah. In other words, what the Rabbis said and meant by their words was COMPLETELY different to how messianics quote their words and then reinterpret them within their own Christian traditions and their latest spins doing the rounds of the various messianic circuits! It never ceases to amaze me the dissonance of the obvious question or observation: If the messianics theories about what the Rabbis said and meant by their words are correct then the Rabbis would be believers in the divine Yeshua would they not?

Entertaining the Idea of a Kosher Pig

It is interesting that the pig is the only animal that has these unique traits – the pig with its split hooves is outwardly acceptable, but the inner analysis of the digestive system reveals the deficiency of not being able to chew the cud. The pig in Jewish thought therefore became synonymous with hypocrisy. The image of the swine presenting its split hooves as evidence of its purity was a powerful image. Various personalities in the Bible who were deemed by the rabbis as hypocritical were thus described:

And Cain went out… Whence did he go out? Rabbi Aibu said: “It means that he threw the words behind him and went out, like one who would deceive the Almighty.” Rabbi Berekiah said in Rabbi Eleazar’s name: “He went forth like one who shows the cloven hoof, like one who deceives his Creator.” (Midrash Rabbah Genesis 22:13)

However, the major personality who was associated with the pig was Esau in particular, and, eventually, the Romans (his descendants) in general.

Rabbi Isaac said: “[God declared]: ‘You have given a name to your swine [Esau]; then I too will name My firstborn, as it says, Thus says the Lord: Israel is My son, My firstborn – (Midrash Rabbah – Genesis 63:8)

Esav, Yaakov’s twin, claimed to follow the same tradition as Yaakov. When Yaakov left to Padan Aram to marry a girl from the family , Esav followed suit and also married a girl “from the family,” but did not divorce his non-Jewish wives. This act of marrying a “girl from the family” was solely in order appear as though he was following in the footstep of Jewish tradition. 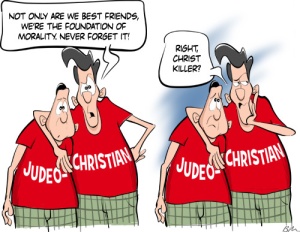 The so called “Judeo-Christian” tradition and now messianic judaism invented by Christians is merely a facade. Despite the fact that the two brothers were twins, and had a lot in common biologically, they had very little in common in terms of lifestyle. There is an often-quoted medrash to support the facade which states, “Why is the pig called a ‘chazir’? Because some day in the future God will give it back (“lehachziro”) to the Jewish people.” The Rishonim ask how this can be. The Rambam postulates, as one of the thirteen principles of our faith, that the laws of the Torah will never change. Can it be that some day it will be permissible for us to eat Pork? Some of the Rishonim explained that “the return of the pig does not refer to eating pork, but rather to the restoration of the Jewish government in place of the Christian one.” The “pig” is the faker who makes believe that he is kosher by showing his split hooves, just as Christians and messianics claim that theirs is a twin-religion with ours, and just as Esav was a twin brother of Yaakov.

What has the above got to do with the kosher pig being Jesus/ Yeshua and Jews having to accept Jesus as a divine messiah? The answer is that there is no connection between a messiah let alone a divine messiah and the return of the pig or that the pig is the messiah. In fact if the midrashim are anything to go by, Esav is the pig which represents in a historical time line: pagan Rome, Christian Rome and present day worldwide Christianity at large which includes messianic Judaism, which in the end undergo a transformation which renders them Kosher by their rejection of Yeshua. The transformation expressed most appropriately by Jeremiah 16:

19 O LORD, my strength, and my stronghold, and my refuge, in the day of affliction, unto Thee shall the nations come from the ends of the earth, and shall say: ‘Our fathers have inherited nought but lies, vanity and things wherein there is no profit.’ 20 Shall a man make unto himself gods, and they are no gods? 21 Therefore, behold, I will cause them to know, this once will I cause them to know My hand and My might; and they shall know that My name is the LORD.