According to the aficionados of so called ‘Messianic Judaism’ shortly before he died, one of Israel’s most prominent rabbis Rav Kaduri allegedly wrote the name of the Messiah on a small note which he requested would remain sealed until now. When the note was opened it revealed what many have known for centuries: Yehoshua, or Yeshua (Jesus), is the Messiah. 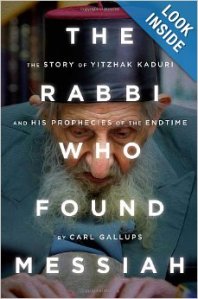 The recent video features the lies of messianic leader “Yakov Damkani” repeating the lie that Rav Kaduri wrote the name of the Messiah on a small note. How schizophrenic to give such a resounding approbation of an Orthodox Jewish Rabbi as Rav Kaduri and then in a recent post moments after the death of Rabbi Ovadiah Yosef saying those that followed Rabbi Ovadiah Yosef are incapable of being able to think for themselves! Moreover to use the Rabbis death to promote the odious lie that Yeshu is the Passover lamb too!

Of course another load of garbage to plop out of the organs of the ‘Messianic Judaism’ movement is the book “The Return of the Kosher pig” (TROTKP) by self proclaimed ‘rabbi’ Shapira who in fact holds a qualification from a messianic online institution. You can evaluate the level of scholarship by an extensive review of TROTKP here. If you have a sensitive stomach to such garbage a fast track summary of the premise for TROTKP can be read here.